"I don't have time to write."
"I'm too busy to attend writers conferences."
"With all that's going on I can't focus on a book."
Yep, I've heard them all... all the reasons people who say they want to be writers just don't get those words on paper.  I've heard just about every excuse there is.  But not from mystery author Robert Bailey.   After three award-winning novels about private eye Art Hardin, Bob won't let things like time, work, or even a brain tumor get in the way of his writing.
That's right.  Bob is a glioblastoma patient.  He has spent the last two years battling his tumor in the speech and language area of the brain to finish his fourth book.
But he doesn't let "cancer patient" define him.  He still defines himself as a writer.   And well he should.  After five years as a corporate security director in Detroit and twenty years as a licensed private investigator, his first novel, PRIVATE HEAT,won the Josiah W. Bancroft Award at the Florida First Coast Writer's Festival in 1998.  When it was published in 2002 it was nominated for a Shamus Award.  Art Hardin's adventures continued with DYING EMBERS and DEAD BANG.
Bob's fourth novel, Deja Noir, is coming more slowly because the tumor is causing a condition no writer would want to face: expressive aphasia.  As his wife, Linda, writes on his blog:
"Part of having expressive aphasia is trouble getting words and phrases that you are thinking to actually come accurately out of your mouth, or fingers, as it were. "
But this hasn't stopped Bob from creating.  On the days he can't get the words into the computer in the right order, his wife is there to support him.  As she says in a recent Facebook post,
"Back to working on Bob's book. He can't type, but he can talk. I can type."
And he is still an active member of the writing community, doing book signings and attending conferences all over his area.  He'll be at the Hanover Book Festival next weekend, and I'm very excited to say he'll appear at Creatures, Crimes & Creativity in September.   He talks about his plans to be there on the C3 blog this week.  I will admit that I'm looking forward to shaking his hand, sharing a drink, and chatting with this man about private eyes and writing.
In the meantime, he has served as an inspiration for me personally.  Nothing is going to stop Bob from finishing his fourth novel.  If I don't write today, what in the world is MY excuse?
What's YOURS?
Posted by Austin S. Camacho at 6:00 AM 4 comments:

The dominoes fell this way: Congress failed to contain spending. Congress passed laws requiring automatic spending cuts. The Defense Department used furloughs as one of its spending cuts.  Since my day job is a DoD position, I join my 650,000 coworkers in working 32 hours a week in July, August and September… and maybe longer.


So, how does the furlough affect THIS  writer’s life?  How does anyone deal with a 20% pay cut?  Well, first you whine.  You rail against cruel fate and forces beyond your control.  Then you examine your expenses and make adjustments.  You shift things from your “need it” list to your “nice to have” list.  Then you do what you always do when you need to escape this unruly world.  You write.  You slip into an orderly universe where, even when things go wrong, everything makes sense.


For most of us, our jobs are part of our identity.  What we do is, to an extent, who we are.  But it’s different for us writers.  My DoD identity is my version of Clark Kent.  That’s the disguise.  It’s what I do so I can be myself at home. Who I really am is a novelist.


So I haven’t simply lost 20% of my income for three months.  I’ve traded it for a full day every week, a day that I can devote to reading, or watching TV or meditation.  Or I can use it to catch up on those big projects I always put off, like thoroughly cleaning the aquarium.  But of course, what will really happen is that I’ll write.  And with the house to myself there’s a good chance I’ll write a lot.


Many people divert their life plans and sublimate their true desires for the security a government job offers.  At a time when that security seems less than secure, I imagine a lot of Defense workers are using their unexpected weekly free day to spend more time with their real but sidetracked desires.


For me the furlough has provided hours I can devote to Intrigue Publishing and more importantly, to HannibalJones and his supporting characters.  More than half way through the next mystery I need to focus on the back story that needs to be filled in.  There is character development that needs to be done.  Writing is just better when you can do it in larger chunks of time.  So in future posts I should be telling you about all the catching up I’ve done.


For now, the furlough days have just started.  And this week… well, I did in fact give the aquarium a thorough cleaning.
Posted by Austin S. Camacho at 7:00 AM 5 comments:

I spent last week in New York for Thrillerfest and it was such a whirlwind I had to take a couple days to sort through the collage of memories to try to answer the question: What do you get out of attending these conferences?


While I was on the panel, “Are You Combat Ready” one of the other authors mentioned that troops today go into battle with something called the THOR system.  It jams cell phones in your area, preventing the enemy from setting off IEDs (Improvised Explosive Devices.)  I didn’t know about this particular tool, but you can bet my thriller hero Morgan Stark will be carrying one in the next book… And criminals in another story may use it to keep people from calling for help.


Asked how a writer can know what to write about, Alexandra Sokoloff said, “Write about what makes you angry.”  On another panel we were told that one way to get background information into your book without slowing the story is to put it into a conversation between characters and have one of them use the backstory as ammunition.  This kind of writing guidance is priceless.


Freebies – Advance Reader Copies and giveaways were everywhere.  These were not just great thrillers, these were novels that are not yet available to the public - the very latest books and future best sellers.  The fun is to gather the books as if you’re playing Pokemon (Gotta Catch 'Em All) then scamper about the conference hunting down every author to get your books signed.  My score this year: 32 books, and that doesn’t count the four free magazines.


Not everything happens AT the conference.  Strolling through the streets of Manhattan we happened upon a television shoot.  We got to watch all the activity that surrounds filming an episode of White Collar, and catch sight of the actors slipping into or out of their trailers.  When show star Tim Dekay stopped for a glass of juice we declared ourselves fans of the show.  His response was, “Well, hey, let’s get a picture.”  He was so gracious and relaxed, and these photos are the kind of souvenir you can’t plan of or go after on purpose.


The number one reason to attend conferences like Thrillerfest is to meet and hang out with other authors.  Chatting with Steve Berry, F. Paul Wilson, Lee Child, Anne Rice, Michael Connelly and R.L.Stine at cocktail parties after listening to them on panels is how you get to be part of a writing community that can boost a career or just keep you inspired to write more.  And after the Con, those connections tend to stay in touch… which is why you’ll see my comments on August McLaughlin’s blog today. I actually know August from an earlier Love is Murder conference.  So you see, you make connections that last and are reinforced at future events.  So now go over to August’s blog and see what SHE got out of Thrillerfest.
Posted by Austin S. Camacho at 2:53 PM 2 comments:

The Thrill of the Fest 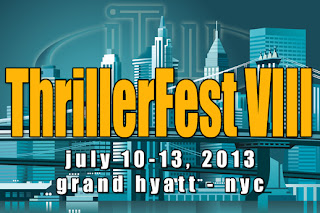 Next week I will join the Intrigue Publishing team at Thrillerfest, one of the most exciting writers’ conferences of the year.  Thrillerfest is a celebration of thriller books, the authors who write them and the fans who read them. It’s always a great time, but fun isn’t the only reason I attend.


Certainly a lot of writers, and aspiring writers, go for Wednesday’s craftfest.  Many more attend Thursday’s agent fest.  For me the first thrills will be at Thursday night’s opening reception.  The real attractions are Friday and Saturday when there are panels all day, five to choose from in any given hour.


The biggest reason I attend Thrillerfest is that it attracts the cream of thriller authors.  For me it is the chance for the best kind of networking.  There is no greater joy than to find myself surrounded by serious writers.  There is nothing more inspiring than chatting with authors you admire and respect.  When I’m on a panel, as I am this year on Friday afternoon, I sit side-by-side with some of the best and my thoughts and opinions float out at the audience mingled with theirs.  That alone makes it worth the trip.


Big name authors.  New and upcoming writers.  Panels of authors talking about their craft. Presentations from the giants of the writing world.  A grand banquet.  All these things add to the fun and value of Thrillerfest, but you will find all these things at many other conferences: Bouchercon, Love is Murder, and Creatures, Crimes &Creativity all offer these same types of events.   The one thing that makes Thrillerfest different, and at least partially justifies it being so much more expensive than the other cons I named, is location.


New York City is the home of the publishing industry. That means authors, editors, agents, publishers and publicists are all nearby.  Many of them can walk to Thrillerfest.  They attend, just because it’s easy.


I drag down from Maryland and am happy for the opportunity.  I created a Facebook event for Thrillerfest but for some reason And I’ll be there for one more reason: I’ll be recruiting fans and authors to attend the Creatures, Crimes & Creativity conference.  I want it to be at least as much fun, and as inspiring, as Thrillerfest.


BTW, I've created a Facebook event but for some reason Facebook won’t let me invite my friends, but I want to know if you’ll be there so please go click the link and leave me a note so I’ll know to look for you.
Posted by Austin S. Camacho at 5:00 AM 1 comment: